SWEET BEGINNINGS: Alicia first laid eyes on Jordan when they were both vacationing in Denver. She knew right from the start that he was the one for her. For the rest of their time in Denver, the two were inseparable. The couple conquered being long-distance for two years until finally Jordan made the big move to Dallas.

PERFECT PROPOSAL: Alicia had been patiently waiting for Jordan to propose for months! Jordan had a big date planned for the couple at the Dallas Arboretum. He instructed Alicia to purchase a new dress prior to the date because they would be taking a lot of pictures. On the day of the proposal, she woke up with pink eye and wanted to reschedule their date. Alicia’s mom insisted that she still go. Luckily, by the time Jordan picked up Alicia, her pink eye had vanished. Upon arriving to the Arboretum, Jordan led Alicia down a dirt path leading to a beautiful waterfall where he had set up a romantic picnic where he proposed! To make it even more special, Jordan had flown in Alicia’s cousin the night before. Her cousin wrote a song for the lovely couple and performed it after the proposal.

GET HER LOOK: Alicia wore the Mila by Watters gown, which was an off-the-shoulder, fit and flare gown featuring ivory ballerina lace and contrasting nude lining. The soft, romantic fabric was offset with a daring deep v neckline, low illusion back, and classic sweep train.

LAID BACK BOHEMIAN: Alicia knew she wanted something classic with a twist. She opted for hues of maroon, red, deep purple, pink and gold.

MOST MEMORABLE MOMENT: Alicia’s favorite moment was after the ceremony getting to relax, eat doughnuts, and drink lattes with all of the people she and her groom love and adore. 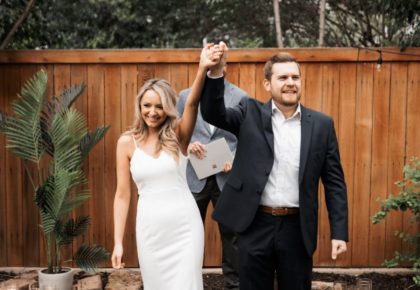 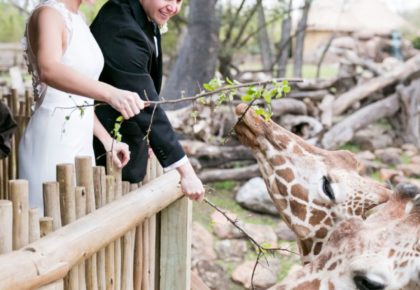