Brittany and Will have an effortless, natural romance, completely evident in this gorgeous autumn engagement session from Nate & Grace Photography! Meandering through Arbor Hills Nature Preserve, this beautiful couple shared kisses and laughs and intimate moments as the sun set and covered all the leaves in a golden layer. Through their sweet embraces and giddy smiles, you can tell they are head-over-heels for each other. Nate and Grace captured their love in such a natural way, and we wish these two the best as they embark on the journey of marriage. Catch their love story below! Cheers!

How they met: “Our story began in the spring of 2010 at Hardin-Simmons University in Abilene, Texas. Despite early run-ins with each other around campus, we officially met during a night out dancing with friends at a favorite local hangout spot known as Guitars. A few weeks later, our paths crossed again at a mutual friend’s party, where we ended up talking and getting to know one another on the porch for the rest of the night. With only a few weeks left in the semester, we spent as much time together as possible and became great friends. Will was suddenly eager to spend his afternoons in the library where I was often studying, and I began dragging friends to university soccer games to watch Will play. Our very first date was at The Homeplace in Tuscola, Texas, and the rest is history!”

The proposal: “Austin, Texas is one of our favorite getaway spots and we try to make a trip there at least once a year. I had been watching an adorable and secluded air BNB in an upscale neighborhood on Lake Austin for about three years without booking it. It had the most beautiful views with huge oak trees all over the property. We were finally lucky enough to book it for a weekend in June of last year. Will coordinated with the host and planned out the entire proposal in the backyard of the home. There were lights strung up in the trees, and it was such a sweet and special moment. To add to it, the host was a photographer, and Will asked her to discretely photograph the proposal for us! It was absolutely perfect!” 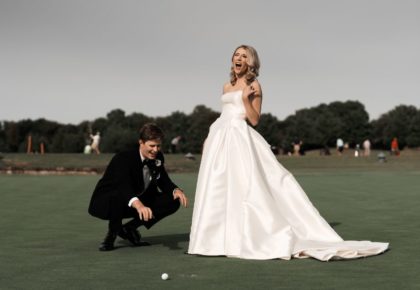