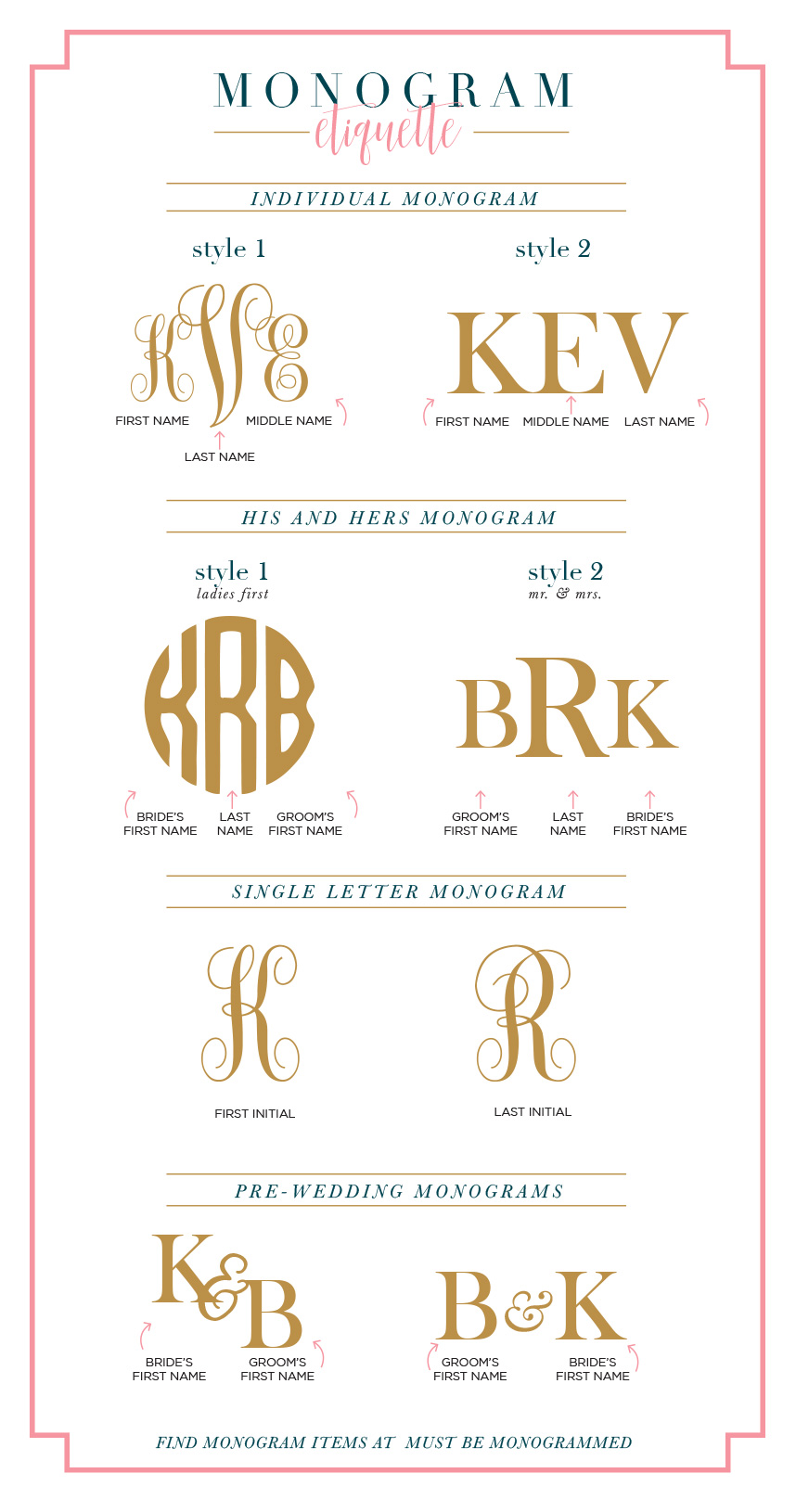 When it comes to monogramming, Kelsie Vogds with Must Be Monogrammed is our go to gal! She’s filling us in on all things monogram today and answering all our questions about the etiquette behind branding with initials. Take a peek below at our Q&A, then head to Must Be Monogrammed to shop pieces for the wedding day, post-wedding or pre-wedding gifts!

In what order should a couple’s initials be listed in a monogram?

A monogram can be listed a few different ways.

Option 1: Individual monogram for the bride or the groom. These will appear one of two ways depending on the font/style.

Style Two: Letters All the Same Size or Block Monogram

This style of monogram traditionally reads First Name Initial, Middle Name Initial, Last Name Initial with all the letters being the same size in line with one another. For example, if you had the name Kelsie Elizabeth Vogds, her monogram would read KEV.

Option 2: His and Hers Monogram

There are two schools of thought on the order in which a couple’s monogram should appear and either order is acceptable. We recommend that once an order for initials is decided on that all future items are monogrammed in this same order for aesthetic purposes, but that’s just us! There’s no right or wrong way to style your family monogram!

Some trinkets are great with just a single first initial. With this, you can add a little flare to the design by adding dots or flourishes on either side of the letter or a frame around the letter. First name of Kelsie would appear as a single “K.” This style is popular for unmarried young women.

The single last name letter is great for barware, towels and stationary. This would appear as a single “R” for a couple with the last name Robinson.

How would you create a couple’s monogram if the wife is keeping her maiden name?

Easy-peasy! Her maiden name would take place of the middle name initial. For example, Kelsie Elizabeth Vogds now becomes Kelsie Vogds Robinson or KRV if she were to choose to keep her maiden name.

How do you list monogram initials for someone with two middle names? Or a hyphenated last name? Or no middle name? What about the Von, O and Mc prefixes?

Block style is your best bet here as many fonts are predesigned for three letter monograms. Sometimes a font typically used for a three-letter monogram can allow for stacking of the two middle initials that appear on the right side of the monogram. Because they are stacked, they will be smaller than the left initial or first name. You can also choose to drop one of the middle names for monogramming leaving you with three initials for the traditional three letter monogram.

No middle name, no worries! Use your two initials or opt for your first or last name only!

Seems complicated with having a prefix or article with the last name, but it’s quite simple – use the first letter of the last name! So “Christy Anna von Burg” = CAV or CAB, Shelly Katherine O’Hare = SKO and Anna Claire McDougal = ACM.

How do same-sex partners build their monogram?

Same sex partners can follow any of the above rules. Popular monogram options for same sex couples if they are both keeping their last names is to use a two-letter monogram side by side or stacked with the last name initials together or use a four-letter monogram with the two last names larger in the middle. First names can be used with an ampersand or flourish

Are there tips for picking the style of monogram to use?

With so many options, it can be confusing which style should be picked! But, that’s the beauty of it being personalized and uniquely yours! Depending on your style and personal preference, the choice is up to you! Expecting to receive some personalized gifts for your upcoming nuptials? Be sure to let guests know your preferred initial order.

It depends on how superstitious the bride is! As someone who is newly engaged, I’m excited to have a new monogram and the anticipation and excitement grows each day! Personally, I won’t be using my new monogram until the day of our wedding or after the wedding – still deciding and slightly superstitious. But that doesn’t mean that any gifts or goodies that are given can’t have our or my new monogram! With the popularity of robes, button downs and outfits for getting ready, brides typically debut their new monogram at that time. As for monograms during the engagement, etiquette says to use your first name initials together. So, Kelsie and Brice would be K&B or B&K depending on the order chosen.

What is the etiquette on registering for monogrammed items?

Go for it! Just be sure to include some guidelines for the gift givers! Consider having the hosts of your showers include a card with monogram information for the couple, the bride and the groom. These guidelines help make sure your gifts are personalized to your preferences as many stores do not allow returns for personalized items especially ones where the monogram is more than a single initial.

It’s all up to the couple/individual or gift giver! Oftentimes, we see single letter initials used on items that will be used for decoration or most commonly, linens. Typically, a single letter monogram and most commonly the first letter of the couple’s last name is used on items such as napkins, towels and barware. For an individual, the first letter of the first name or last name is also appropriate.

One of my bridesmaids is getting married soon after my wedding. How should I monogram her bridesmaid gift?

Our vote is to use her new married monogram! She’ll be able to enjoy your oh so thoughtful gift for years to come.

How should I enter or provide my monogram to a personalization store?

Must Be Monogrammed has all monograms provided in the order in which it should appear (i.e. First Initial, Last Initial, Middle Initial) and we also ask that the full name is included to double check! As the old saying goes, measure twice and cut once. When you provide the full name or couple’s names, we can double check to make sure the order provided matches the traditional order in which the monogram should appear. If the order of initials provided doesn’t match the traditional order, we always reach out to the customer for confirmation ensuring that items are personalized in the proper order.

Other Local Vendors:
Must Be Monogrammed